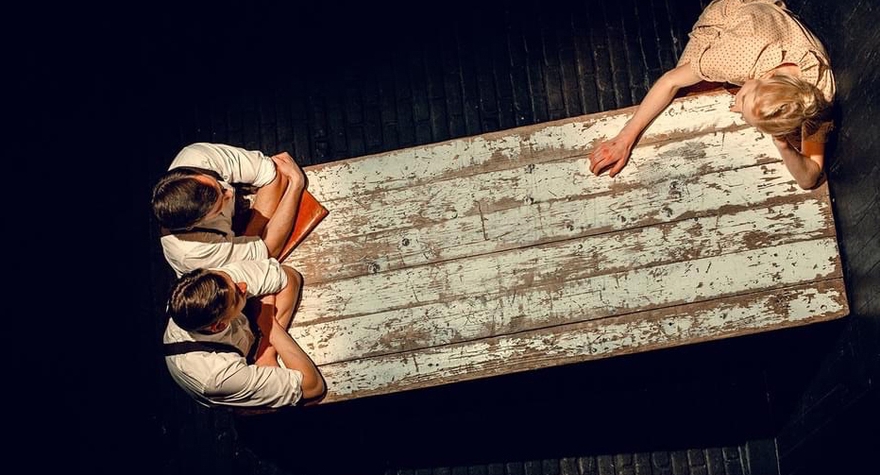 – So you know the Ten Commandments. Do you obey them?
– No, sir, we do not obey them. Nobody obeys them. It is written: “Thou shallt not kill”, yet, everyone kills.”

The Notebook is the author’s reading of the novel of the same name by Ágota Kristóf*, “the most cruel book of the 20th century”. The action takes place during the Second World War and immerses the viewer in the terrible conditions of the existence of twin boys.

The mother, unable to feed her sons, brings them to a small town and leaves them in the care of their grandmother. In order to survive and resist pain, cold and humiliation, the brothers have to calmly and ruthlessly destroy any trace of compassion and love in themselves, to learn to kill. And in order to establish themselves in their own dehumanization, the boys keep a detailed diary, writing down their “achievements” in a thick notebook. This is the story about the monstrous metamorphosis that happen to the twins.

“When I first watched the film Come and See by Elem Klimov, I realized that I would not be able to watch it again. Having finished reading the book The Notebook by Ágota Kristóf, I realized that I would never open it. But we made this performance, – says director Tatyana Tarasova. – We thought about how fascism is born and what is the mechanism of dehumanization. Why do gentle boys turn into cold-blooded killers who write their own Bible, in which there is no main commandment – "Thou shalt not kill." Reading Ágota Kristóf's book, one feels shame and nausea at the same time – it is impossible for an ordinary person to go this way. In it, life teaches the boys lessons, it is not their fault that it teaches cruelty, but why did they become the best students?”

Historical realities, both in the book and in the play, are only a background. One can only assume that the “Big City” is the capital of Hungary, the “Small City” is a place on the border with Austria, the “foreign officer” is a fascist, and the “new foreigners” are Soviet soldiers. Place and time are not important. The main thing is that the war is near. And it is precisely “war that turns people born to live as brothers into wild beasts” (Voltaire).

Tatyana Tarasova staged this performance with students (today they are already graduates) of the directing department of GITIS, the workshop of Oleg Kudryashov. The work became the winner of the “Moskovsky Komsomolets Theatre Award” newspaper for the best graduation performance of the 2020/2021 season.

*Ágota Kristóf was born in Hungary and emigrated to Switzerland in 1956. In 1986, she wrote a novel in French called The Notebook and "woke up famous." Ms. Kristóf has received the European prize for French literature and her book has been translated into 15 languages.