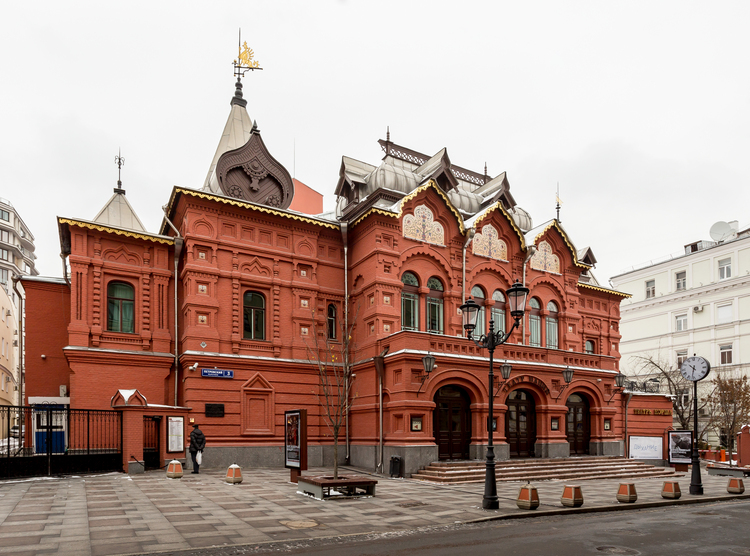 Theatre of Nations is based in a building of the former private drama theatre founded by Fyodor Korsh in 1885, which used to be the largest privately owned theatre in the state. For its 130 years the building has seen many events that made major impact on the history of the performing arts. Several times the theatre was reformed, changing its name, team and artistic objectives.

The current phase of development of the Theatre of Nations started in 2006 with the arrival of the new artistic director – honored artist of Russia and holder of many state awards, Evgeny Mironov.

Today the Theatre of Nations utilizes an operational model that is unique for Moscow and Russia: it excludes employment of a staff company of actors and creative personnel, while each performance is created using production planning, designed individually for the project. The main objective of the Theatre of Nations is to establish an international theatre dialogue and bring the best forces of international theatre to its stage.

The Theatre of Nations also works closely with Russian stage directors such as Kirill Serebrennikov, Konstantin Bogomolov, Andrey Moguchiy, Filipp Grigoryan, Timofey Kulyabin, Dmitriy Volkostrelov and others. Performances of the theatre, as well as its actors and stage directors frequently receive major theatre and cinema awards. Plenty of ‘Golden Mask’, ‘Crystal Turandot’, ‘Nika’, ‘Made in Russia’ and other awards were won counting since 2006.

For the past several years the Theatre of Nations has also been striving to establish a theatrical structure that erases boundaries of genre, style and form. Therefore the theatre has been paying special attention to its Small Stage – an experimental venue opened in 2013 and designed for the young Russian stage directors, choreographers and musicians to bring their ideas to life.

Also the Theatre of Nations is the founder of ‘The Small Town Theatre Festival of Russia’ – the only major festival that brings together all significant productions by the regional theatres of Russia, featuring many outstanding directors, actors and playwrights.